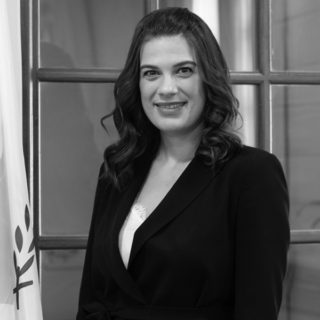 Natasa Pilides was appointed Minister of Energy, Commerce and Industry on July 10th 2020.

Previously, on March 1st 2018 she had been appointed as the first Shipping Deputy Minister of the Republic of Cyprus. From April 2016 to March 2018, Ms Pilides was Director General of the Cyprus Investment Promotion Agency.

She has more than fifteen years of private sector experience, as a Director and Regional Chief Operating Officer at Baker Tilly South East Europe. She also worked, for 9 years, at PwC in Cyprus, Milan and London.

She graduated from Oxford University with a first-class honours degree, with distinction, in Modern Languages and Literature (French and Italian). She is a Fellow of ICAEW and a member of ICPAC