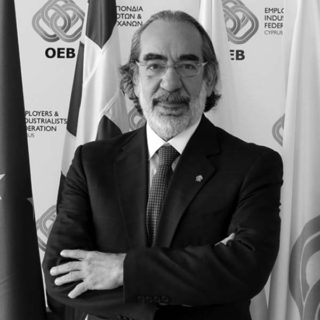 Mr. Antonios Antoniou is the Chairman of the Cyprus Employers & Industrialists Federation (OEB) since January 2021. He is a Member of the Board of Directors of OEB as from July 2011 and a Member of its Executive Committee as from December 2013. Moreover, he is the Chairman of the Cyprus Association of the Large Electricity Consumers that operates under the umbrella of OEB, and he has under his supervision the Energy Committee and the Committee of Green Growth & Circular Economy of OEB. Furthermore, he is the President of the Cyprus Circular Economy Network which operates under the auspices of OEB.

As from February 2008 he has been the Executive Chairman of Vassiliko Cement Works Public Company Ltd and Member of Board of Directors of its subsidiaries.

From 1998 until 2006 he was Senior Vice President (Operations and Systems) of Nielsen Europe and a member of the European Executive Committee of Nielsen.

He was a founding partner of AMER World Research Ltd where he was Deputy General Manager from 1983 until 1998.

He worked for 5 years as a Biochemist/Microbiologist at University College London and for 3 years as a Computer Systems Analyst at British Gas Headquarters in London.

He studied at the University of London where he obtained a BSc (Hons) degree in Biological Sciences and a postgraduate diploma in Computer Sciences.

He was born in London.