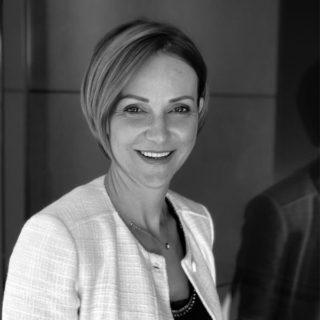 Alexandra Sdoukou is a policy professional, who serves since 2004 as special advisor to the Greek government in the areas of energy, business development and economic regulation.

From 2012 to 2015 she was heading the Minister’s Cabinet at the Ministry of Environment, Energy & Climate Change. In this context she has been heavily involved in energy affairs and geopolitics with extensive knowledge in country specific commodity dynamics and trends in oil and gas, LNG and renewables. She has been active in the fields of exploration and exploitation of hydrocarbons in Greece. She became also knowledgeable about asset privatization projects.

Previously, Alexandra worked as a special advisor to Minister of Development and her main responsibility was to review industry legislation and launch market development programs, with the aim to enhance competition and investment opportunities in Greece.

Prior to that, she served as legal counsel to the Deputy Minister of Economics & Finance from 2004 to 2007. As part of her responsibility she focused on structural reforms to restore growth and competitiveness as well as moving legislative initiatives through Parliament.

Alexandra holds a Bachelor in Law, an LLM in European Commercial Law, an MSc in International & Economic studies and has also attended the Executive Program of Harvard Kennedy School of Government.